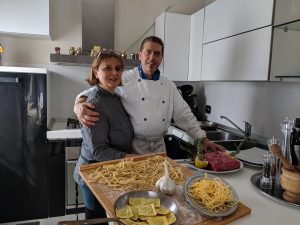 Tradition and innovation are among the strengths of restaurant L’Angolo, opened in 1977 and still considered as a landmark of the area for romantic dinners or friend gatherings.

The history of this place goes back to a time when the founder, Gino Contemori, due to a severe illness, quit his business as truck driver and, helped by his very young son Paolo and wife Pia, turned the once truck dedicated garage into the first version of a small “trattoria” that would have later thrived and grown into the original and diversified space we can today appreciate.

Paolo and his wife Manuela keep treasuring the special connection with the typical Tuscan cuisine and have recently broadened their offer by opening a new restaurant area, the “Olleria”, which promotes a new way of cooking the prime selection of “Chianina” meat.

For those of you who want to discover the sincere Tuscany tradition, a vast choice of different plates is available, going from legume and bread soups and broths to homemade pasta, in particular the flavourful “pici”, enriched with meat, game and vegetarian sauces.

When it comes to mains the kitchen recommends the house special beef tenderloin cooked with “Nobile” wine.

It is worth mentioning that different tasting menus are also an important component of L’Angolo’s menu together with a varied and attractive list of many brick oven-cooked pizzas.